You’ve reached the website of Fred Deakin. I do a lot of different things (e.g. make music, create art and design, teach, write, perform) and this site is intended to showcase as many of them as possible without giving you a headache.

Currently I run FANDCO, a studio which specialises in creative technology and educational projects. From 2013-2020 I was Professor of Digital Arts at the University of the Arts London where I created and delivered the ModUAL programme. My most recent musical release was The Lasters, an epic science-fiction concept album, in 2019.

As half of the band Lemon Jelly with Nick Franglen I have been Mercury and Brit nominated, sold over half a million albums, headlined stages at almost every major UK music festival (Glastonbury, Bestival, Big Chill, Reading, Leeds, T in the Park etc.) and made three albums that I’m very proud of. I was also founder and director of ground-breaking London digital design agency Airside with Nat Hunter and Alex Maclean, which won and was nominated for two BAFTAs, nine D&ADs, four Design Week Awards including Best In Show, a Webby and a bunch of others I can’t remember. We ran for fourteen years and closed on a high in early 2012. The Gestalten book “Airside By Airside” (2010) tells our story: it was a lot of fun.

I’ve performed at TED, interviewed Viv Albertine, been on panels with Jarvis Cocker, Peter Saville and Rankin, judged the British Animation Awards and DJed at the Serpentine Pavilion with Steve Martin as my warm up man. I’ve given talks at the Design Museum, the Barbican, the RCA, Design Indaba and Pictoplasma among many others. I was a member of the working group for the Gowers Review white paper on the UK’s creative economy which was presented to the DCMS in 2006. I’m always open to working on interesting projects so do get in touch if you’d like to collaborate on something.

I interviewed Viv Albertine at CSM – lucky me. What an amazing woman.

DJing at Dommune in Tokyo

Webcast live from the club – futuristic or what?

Rough Trade’s 40th anniversary book has got a tribute written by me in it. 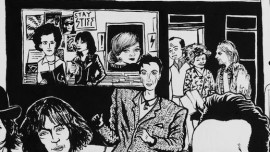 Some opinions on art, design and music filmed at Central Saint Martins. 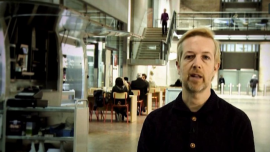